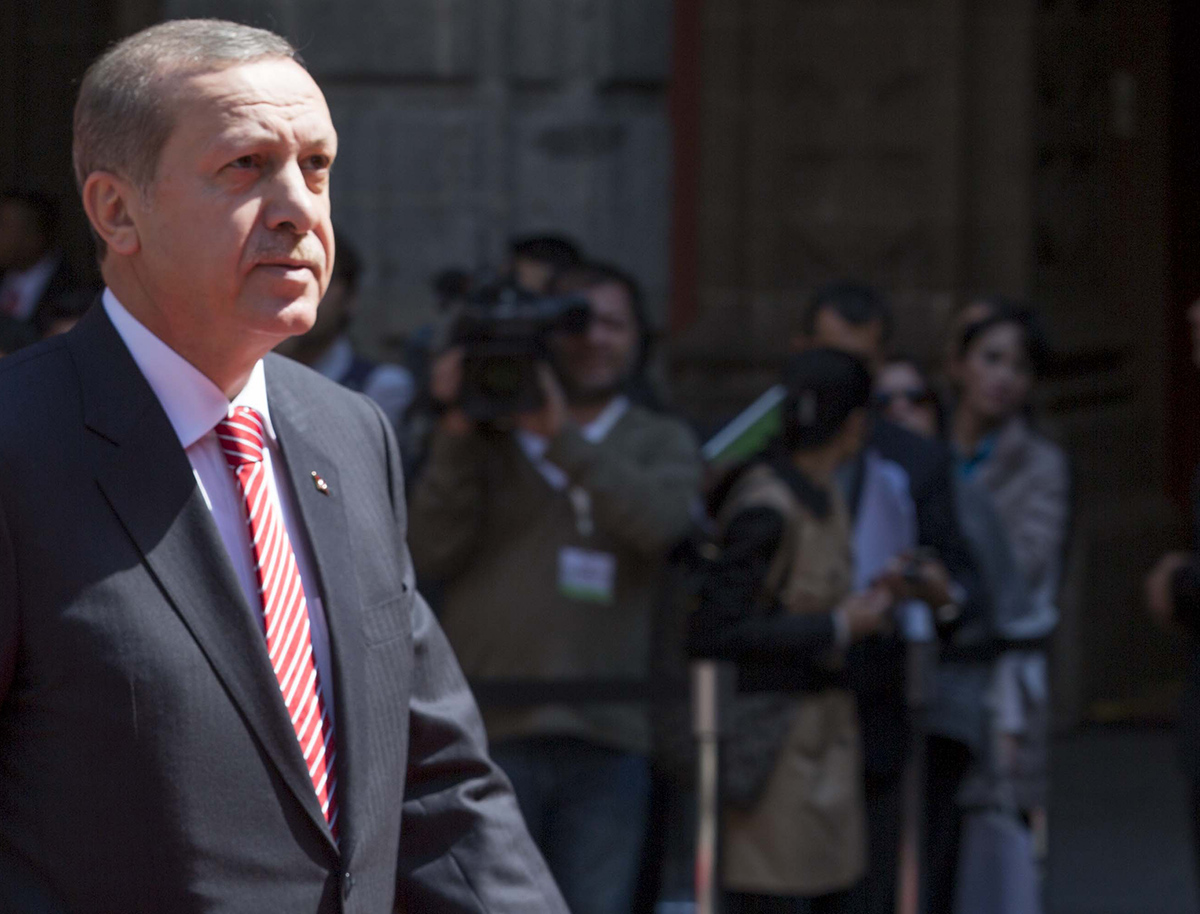 No more than a few weeks passed after the downing of the Russian Su-24 at the Turkish-Syrian border and the Turks have shifted their attention east.  Ankara’s move to send a notable military force of 400 men of the 3rd Siirt Brigade, along with 25 M60A3 tanks and artillery to the Bashiqa camp – a few kilometers north of ISIS-held Mosul – seems to have enraged Baghdad. Pro-government Turkish daily Hürriyet estimated the total military presence to 600 troops, adding that they were there with the consent of the Iraqis. The Iraqi Prime Minister Haider al-Abadi denied that though, pertaining the initiative as violation of Iraq’s national sovereignty.

In the meantime, while swiftly taking Abadi’s side on the matter, Russia continued to ramp up an assertive stance towards Ankara with further mobilisation of military forces and sharp remarks made by the Kremlin.

The Turkish authorities, initially attempted to rebut Abadi’s accusation of “sovereignty violation” noting that the purpose of their expedition was to assist in training Kurdish Peshmerga fighters against ISIS. The ultimatum sent by Abadi – urging Turkey to withdraw its forces from the Iraqi territory (excluding the staff already in service to the administration), otherwise he would bring the issue to the UN Security Council – was of little avail. The Iraqi Ministry of Foreign Affairs summoned Turkey’s ambassador to repeat that it considers the move an “unfriendly act”, while denying once more there was prior approval.

For his part, Turkish PM Ahmet Davutoglu explained that, in Bashiqa, more than 2,000 “brothers” have received training for two years, in coordination with the Iraqi Ministry of Defence. Soon, Ankara did announce that no more troops would be deployed in Iraq, but in his letter to Abadi, Davutoglu fell short of making any reference to the existing forces. “Those who are disturbed by the cooperation of Turkey and Iraq and who want to end it should not be allowed to attain their goal”, the letter said, according to Reuters, also expressing his wish to visit Baghdad, if that would help diffuse the tension.

The Turks’ ambiguous narrative continued further, despite Abadi’s pleading that NATO should… bring Turkey to reason. On the one hand, Turkish Prime Minister Mevlut Cavusoglu stressed that Ankara respects the territorial integrity of Iraq; on the other, his administration would not withdraw the Turkish forces, on the basis of “our duty to protect the military advisors providing training”, he said in an interview on Kanal 24 channel.

Nevertheless, the Iraqi Defence Minister Khaled al-Obeidi considered the Turkish force was too large for such a purpose. It also seems to be very small to contribute to a campaign for recapturing Mosul, in view of the US Central Command’s estimates back in February that a force of 20-25,000 would be just as large enough for that. Finally, more or less, Abadi pointed to the oil smuggling conducted through Turkey by “terrorist gangs”, as well as the free passage extremists enjoy. “They promised us that they would stop the entry of terrorists”, he said during a meeting with the German Foreign Minister Frank-Walter Steinmeier, referring to the UNSC resolution 2249/2015.

At a first reading, Turkey’s boosted interest in Iraq – instead of Syria – indicates it feels cornered by the Russian consecutive responses to the Sukhoi 24 downing in November. All things considered, Ankara’s worries seem reasonable:

At the political level, Russia has condemned the Turkish movement in Iraq, while the PM Dmitry Medvedev stated that in the terms of the 20th century, the downing of an aircraft would be clearly a casus belli; however, the Kremlin decided not to give a “symmetrical” response. Vladimir Putin’s comment did not fall unnoted either. “The Kalibrs (sea based cruise missiles) and KH-101 (airborne cruise missile) have proved to be modern and highly effective, and now we know it for sure – precision weapons that can be equipped with both conventional and special warheads, which are nuclear. Naturally, this is not necessary when fighting terrorists and, I hope, will never be needed”, the Russian President said, during a meeting with his Defence Minister Sergey Shoigu.

At a second level and given that Turkish President Recep Tayip Erdogan realises that his plans for Syria have been hindered mainly by the Russian intervention, he seeks another way to emerge as a key player in the region. Thus, he approached one of the few “friends” Ankara has left, that is Massoud Barzani, the President of the Iraqi Kurdistan Region.

Perhaps it is no coincidence that the expansion of Turkish military presence near Mosul (which is mainly inhabited by Iraqi Kurds) took place a few days before Barzani visited Ankara and made clear that Iraqi Kurdistan would remain neutral in the feud between Ankara and Baghdad. According to the Turkish Press, the Iraqi official also visited the Turkish intelligence service MIT, where he met with MIT head Hakan Fidan. The latter was said to pay a swift visit to Baghdad along with Foreign Undersecretary Feridun Sinirlioglu.

The motives behind Erdogan’s amicable stance towards Erbil were conspicuously described by the former Turkish military consultant Metin Gurcan, in an article for Al Monitor. As Gurcan suggests, Ankara has three objectives:

(1) Firstly, to foment an informal alliance between Turkey and Iraqi Kurdistan, with the support of Sunni tribes active in the region, in order to thwart the rising power of Shiites in the Baghdad administration, which – to the Turkish eyes – is collapsing.

(2) Secondly, to acquire a decisive role in military and political developments, for instance in the case of liberation of Mosul from terrorist control, as well as to protect the Turkmen militants, who have been loyal to the Erdogan regime.

(3) Thirdly, to stop the expansion of PKK, especially in the northwest of Iraq, at the Sinjar region, and prevent it from uniting with the Syrian Kurds. Besides, during the same period, the turkish army has announced several strikes against PKK targets.

In the Turkish aspirations we should not omit Ankara’s efforts to weigh in the US agenda. Washington already is in the process of sending special forces in Iraq in order to retake Ramadi, while voices in favour of ground forces deployment increase (the Republicans call for a 20,000-strong intervention).

So, while the American plans for the Middle East are still in brew, Turkey needs to have its say in all possible scenarios. One of these is surely the concept of creating an independent Kurdish or Sunni state (the so called Sunni-stan). All but far-fetched, this scenario was recently proposed (again) by the former United States Ambassador to the UN, John Bolton, in an article he wrote for the New York Times in November.

It’s worth noting that Washington has not endorsed the Turkish side in the dispute between Ankara and Baghdad. Initially, American diplomats told Reuters that the USA were aware of the Turkish presence in Iraq but “was not part of the coalition” [against ISIS]. Vice President Joe Biden aligned with the Iraqi position that the Turkish deployment “occurred without the prior consent of the Iraqi government”. The Arab League also condemned it, calling it a “blatant intervention”.

The notion of partnership between Turkey and the Kurdistan Regional Government (KRG) is certainly not new. In fact, back in March 2015, the prominent Turkish-American historian and expert on US-Turkey relations, Soner Cagaptay (of the Washington Institute for Near East Policy), suggested the “Undeclared Economic Commonwealth”. Along with his fellow authors, Mr Cagaptay foresaw the strengthening of Ankara-Erbil relations, stressing -among others- that the Iraqi Kurds can pose as an alternative source of oil and gas supply for Turkey, preferable to Iran or Russia. In the meantime, trade between the KRG and Turkey rose to 1.4 billion dollars in 2007 to 8 billion in 2013, while the turkish currency was to be used in certain market segments. But above all, Turkey and the KRG have a common enemy: Baghdad’s Shiites…

This site uses Akismet to reduce spam. Learn how your comment data is processed.